All You Need to Know About Header Bidding

In digital advertising, header bidding is one of the ways publishers try to generate more revenue from their ad inventory.

The concept is not entirely new, but it has gained traction recently as more and more publishers and companies have started building products around it. It has gotten many people interested, and they want someone to dispel the mystery around this concept.

Therefore, in this article, we will cover major topics related to header bidding, such as what header bidding is, how it works, and its advantages and disadvantages.

When advertisers and publishers started to notice the shortcomings of Real-Time Bidding(RTB) and Google’s competitive advantage, they developed header bidding as a solution back in 2014. These shortcomings limited the publisher’s potential to create more revenue and for advertisers to get more exposure, and header bidding tackled these issues well. 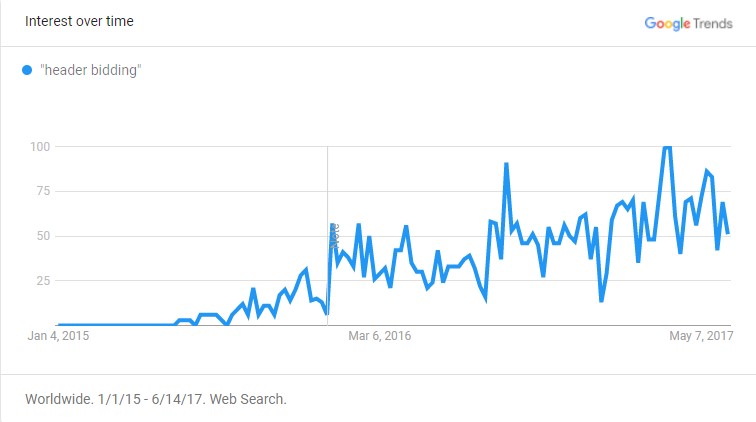 However, the term didn’t become mainstream for the first year. The generic name was not even ‘header bidding,’ and vendors used many different words, such as pre-bidding, full bidding, parallel auction, etc., for the same thing.

Soon the term became widely accepted and replaced all other terminologies as a standard name for the technique. It made it easier for advertisers, publishers, vendors, and users alike to communicate and implement header bidding. Soon after that, the method became quite famous, and now many people are educating themselves about the concept or implementing it in their advertising.

What is header bidding?

Header bidding, also known as advanced bidding, is a bidding process where multiple buyers bid on the same ad inventory. This creates a more competitive bidding environment that yields better revenues for the publisher. It is a type of programmatic advertising and Real-Time Bidding(RTB) that allows publishers to offer specific ad inventory to various ad exchanges before their ad servers jump in.

Header bidding tackles many of the inefficiencies of the traditional RTB and resolves issues such as the ad waterfall sequence and the Google Ad Exchange privileges(more on those later).

How Does Header Bidding Work?

For header bidding, publishers need to add a piece of Javascript in the header of their page that is used for advertising. As soon as a user opens that page, the publisher sends requests to various ad networks. These networks start bidding on the space available, depending on what they think it is worth.

The winning bid goes to the publisher’s ad server and is connected to the advertiser’s server. Once a user opens up a page, the ad is displayed in that particular space.

Moreover, header bidding combines the inventory into a single server-side supply. This allows the publishers to sell their inventory on a per-impression basis and brings more transparency to each impression’s value.

The most obvious benefit of header bidding for a publisher is greater revenue, but the question is, how?

As already mentioned, header bidding deals with certain inefficiencies such as the waterfall or the Google AdX advantage effectively. To truly understand why publishers gravitate towards header bidding, it is important to learn these inefficiencies and how they hamper a publisher’s potential to generate more revenue from his ad inventory.

Also known as daisy chaining, ad waterfall is a programmatic process in which your ad space is passed down from advertiser to advertiser until someone decides to buy it. In theory, it is used to streamline the RTB process and get you the best price for your ad inventory. However, that is not the case sometimes.

To better explain how an ad waterfall works, let’s see what goes on behind the screen.

As soon as a user opens up your page where ad space is available to be sold, your site reaches out to the ad server to get an ad. Direct deals negotiated by a site’s sales team are served up first.

If there’s no direct advertiser interested in serving an ad for this space, the space is made available with the help of Google Ad Manager. This is called the waterfall sequence.

Based on historical data, the space is first offered to the top-ranked Supply Side Platform(SSP). This means that the buyer who buys more often from you will get the first offer. However, there is no guarantee that the same SSP will buy the space this time too. If that happens, the space is then passed down to another buyer. This keeps happening until a buyer makes the purchase.

So far, so good. However, there’s a catch.

Google Ad Manager cascades down the price of your ad space every time it is passed down to another buyer. This means that there is a chance for you to miss out on the highest bidder because your space gets sold to the buyer with a higher bid than the previous one.

The following picture will help you understand the inefficiency of Ad Waterfall better.

As you can see, there is a $9 bid available after the winning bid. However, due to the programmatic nature of this system, the space is not passed down because there is no guarantee that it will be a higher price, so it is already sold to a bidder that had a higher buying price than the previous one.

Let us now look at the second problem associated with traditional RTB.

In combination with the waterfall sequence, Google AdX privilege further impacts the revenue potential of publishers.

Publishers who use Google ad servers will know that there is a dynamic allocation setting that lets the Google AdX get the last word in the bidding. Whenever there is a bid in the waterfall sequence, Google will be the last to bid, supposedly letting it place a higher bid.

However, that is not always true.

As already discussed, there is a chance to miss out on a higher bid in a waterfall sequence because there’s no guarantee of what’s next. That, along with Google AdX’s privileged position, makes many publishers feel like they are not getting the highest bid for their ad space. Because Google, too, will outbid any bids without checking the successive bids.

In the first quarter of 2021, 67.8 percent of online publishing websites and 17.5 percent of the top 100 thousand websites in the United States used header bidding.

The trend has increased over the past few years in favor of header bidding, and that is because of the clear advantages it brings to the table. Here’s what they are:

As a natural consequence of parallel bidding, there is a higher number of bidders resulting in higher competition. This increases the value of your ad space, ultimately increasing the Cost per Mille(CPM) drastically.

2.Deals With the Waterfall Problem 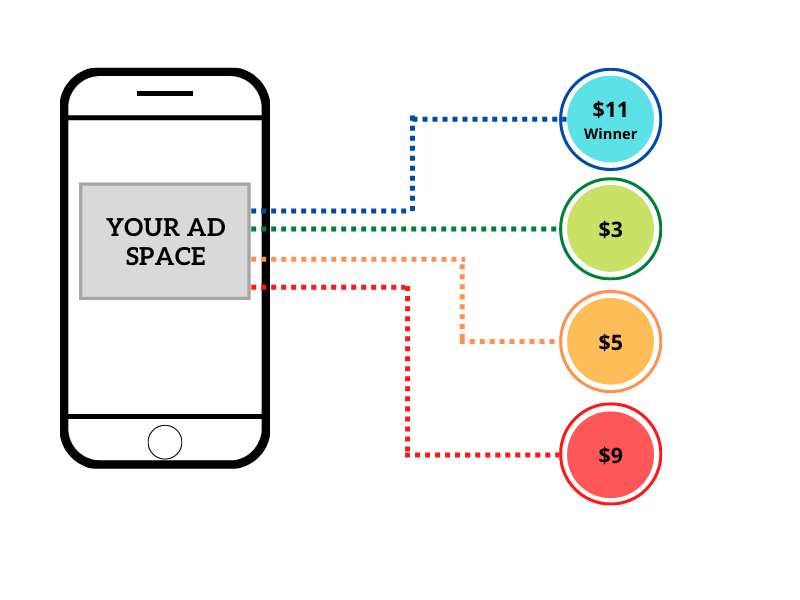 Header bidding is also referred to as parallel bidding. It puts every bidder on an equal playing field. Unlike the waterfall or sequential bidding, there is no chance for publishers to miss out on higher bids.

The following picture represents how that happens.

Since header bidding bypasses ad servers and directly lets the buyers bid, it eliminates the privilege Google Ad Exchange has throughout the process. The publisher can choose to sell the space to the highest bidder without AdX jumping in.

But you might be wondering, how could it all be so perfect? There have got to be some downsides to using header bidding. Well, you aren’t wrong.

One of the major downsides of header bidding is its impact on a publisher’s page load times. As a publisher introduces more and more SSP tags into his page, the page latency goes up. People are quite wary of slow load times these days. Third-party ad tags further slow down loading times, putting users in a bad mood.

Secondly, header bidding is not easy to implement in your digital advertising strategy. It requires a fair amount of technical knowledge and help.

However, as inconvenient as it might sound, many publishers don’t let complicated processes discourage them from making more revenue. To them, header bidding is still better than the current state of programmatic advertising. It is not ideal, but they’re still willing to try it out.

To deal with the high latency, many publishers employ server-side header bidding. Here’s what it is.

Therefore, many publishers use a hybrid header bidding regiment where the bidding is conducted both through the client-side and the server-side bidding methodologies.

Do You Need Header Bidding?

This is perhaps the most pertinent question for new and old publishers alike. And the answer comes down to the stage you’re currently working at.

In the beginning, Google Ad Manager and AdSense will be more than enough. But as your audience grows, your ad tech stack will grow too. It will also get more complicated to handle with time. It will involve things like legal and privacy matters and high-value ad units.

Generally speaking, when a website crosses 300,000 page views per month for websites or 10,000 daily active users for mobile applications, publishers start exploring other options beyond Google’s ad network or ad exchange. This is an appropriate time to consider header bidding to increase ad revenues.

Implementing header bidding is complicated, but it has its rewards. It has proven to yield higher revenues, and many publishers are moving towards it now more than ever. With this guide in hand, you too can start familiarizing yourself with the concept. Check out PapayAds blog for similar guides and articles! 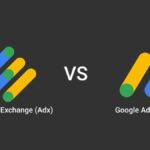 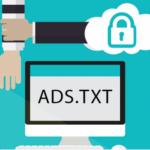 What Is Ads.txt? Here’s What You Need To Know 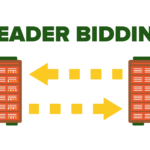 All You Need To Know About Header Bidding

*Calculation based on estimated website traffic from tier 1 and 2 countries using 3 display banners per page and good ads viewability.

Due to the large number of requests and our policy to dedicate our best service to all customers we are able to accept in the Premium Service only websites with a minimum traffic of 400.000 monthly pageviews. If your business is smaller, please apply to the Self Service. We currently provide support in English, Spanish and Italian language.

We received your message and you'll hear from us soon. Thank You!